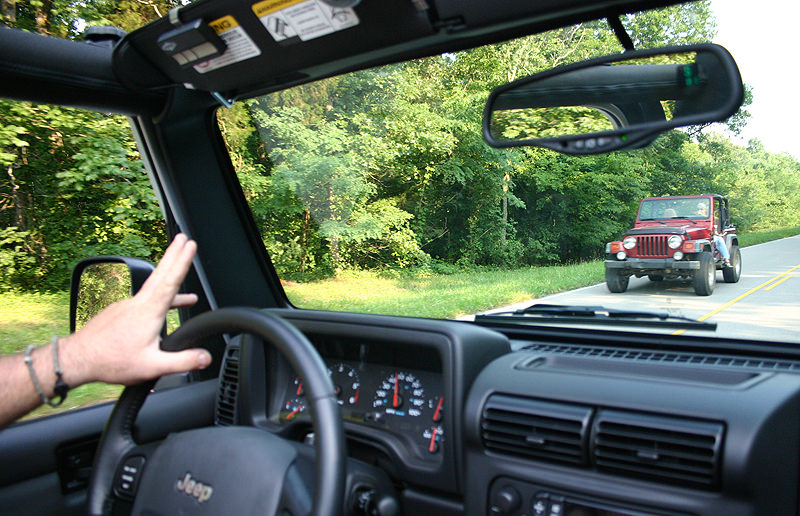 About six months ago, something unexpected and strange started happening to me. People, it seemed, began to wave to me as I was driving.

For 18 years I had driven the same ’95 Nissan pickup truck, the one I purchased with my father my freshman year of college. Because the truck died, my plan to get a new vehicle was accelerated by two years. I purchased my dream ride—a Jeep Wrangler.

That is when the waves began. Other Jeep drivers began waving to me. It took me a few days to mentally connect the dots, to realize that the only thing all the waves had in common was that the drivers all drove Jeep Wranglers. I did a bit of research and discovered I had accidentally joined a cult. Dissertations have been written on “the Jeep people”—the people who love a vehicle that rides rough and gets horrible gas mileage because we can take the tops off and go off-road if we desire. There are websites celebrating the cult of Jeep and even instructions in forums detailing how Jeep owners should wave to one another—except for Jeep Cherokee drivers as apparently they don’t count as real.

I am now a member of the Jeep community, and the experience has reminded me of three things about community:

I must admit I have enjoyed being a part of the club. I love my new ride, and the waves, as strange as it sounds, are nice. Kaye loves driving my Jeep because, and I quote, “People are so nice to me!!” I have been included in a community I didn’t even know existed. And no matter what type of day I have, someone is going to wave to me.

The reason we long to belong to something, the reason we all want community, is that God has created us for community. Early in the biblical narrative, before sin tainted and impacted everything, we learn that is not good for “man to be alone.” We were created to belong, to live in community. And God has given us the gift of Christian community to mature us and encourage us.

2) Community is only as strong as what it is built upon.

While I love my Jeep, the Jeep community I am part of is a bit shallow and temporary. This is not an indictment on those in the Jeep community but an indictment on the foundation of the community. The foundation of the community is weak. It is temporary and fleeting. For example, I have mistakenly waved to people while forgetting that I am driving my wife’s car, only to be met with a cold stare. My Jeep community is built on something that will not last, on something that I can lose or sell or have stolen.

Community means common unity. It essentially means to unite around something that we have in common. What we have in common, what unites believers, is so much deeper than any other common unity. True Christian community is strong and lasts because it is built on the foundation of our eternal King who offered Himself for us. It is built on a foundation that does not shift and is everlasting. D.A. Carson reminds us:

The church is made up of natural enemies. What binds us together is not common education, common race, common income levels, common politics, common nationality, common accents, common jobs, or anything else of that sort. Christians come together because they have all been saved by Jesus Christ… They are a band of natural enemies who love one another for Jesus’ sake.

Every community costs. Being in a running club, for example, costs you energy, money, and time. Joining a chess club, a group of Mac users, or a Harley Davidson riding group will cost you. My entrance into the Jeep community was secured the day I purchased my new Jeep.

Because of what He has done for us, we are encouraged to unite around the same purpose and humbly submit ourselves to one another. Of course, this is costly too. It means “thinking of others as more important than ourselves” (Philippians 2:1-4). But our cost pales in comparison to what securing our community cost Him.

I really am enjoying my new Jeep. The waves are nice too. But the community pales in comparison to the community Christ gives us. Our foundation is so much stronger, so much richer.

Previous Post: « When a Blessing Becomes Meaningless
Next Post: What happens when your discipleship pastor goes missing? »