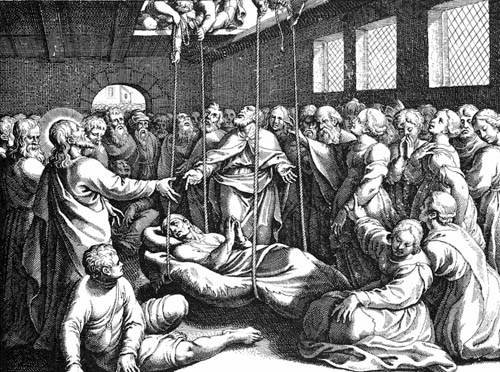 One moment sticks out in my mind from journalism class my senior year in high school. It was late fall and the journalism class at a rival high school published one of those black and white high school newspapers, and we had several copies. Our teacher passed them out to us and sat at his desk as we looked through the newspapers page by page.

We shredded it. We laughed at the titles of the columns, made disparaging comments about the photographs used, and lamented the format. We had a grand time.

Then I looked up at our teacher, who was shaking his head in silent frustration. I asked him, “What’s wrong?” And I have never forgotten his response—“They have a published paper. You all don’t. You are sitting there criticizing a published paper when all you have are ideas jotted down in your notebooks.”

It is easier to be a critic and a cynic. It really is. It takes less work, less energy, and less risk. And there are always people who would love to join.

In Mark 2, we see Jesus speaking to a crowd that is crammed in and around Peter’s house. Four men want to bring a paralyzed man to Jesus, but they cannot get in through the door. So they take the roof off the place and lower the man on a mat to Jesus. Jesus says to the paralyzed man, “Son, your sins are forgiven.” And to prove that He has the power to forgive sin, he tells the paralytic to “pick up your mat and go home.”

In the midst of the miracle, there were critics. Evidently, the religious arrived early because they are the only ones sitting (verse 6). They were there to critique. They were there to evaluate the mission of Christ rather than participate in it. Unlike the four men who lowered the man on the mat, they united in criticism instead of uniting in the mission of bringing the paralyzed man to Christ.

God has been gracious to remind me of that day in journalism class. After being confronted with our lazy and cynical criticism, we got to work. We came together and produced our own high school paper. We stopped criticizing everyone else and owned what we were responsible for.

There is a massive difference between a critical mind and a critical spirit. The former is wise and humble. The latter is proud and divisive. Believers should always think critically and theologically. Error should be called out and truth should be proclaimed, but I fear some believers waste much precious time engaging in friendly fire with brothers and sisters in Christ.

By God’s grace, may we participate in the mission of God and not merely observe and evaluate. And by God’s grace, may we stay focused on the mission in the midst of those who constantly evaluate without joining the mission. D.L. Moody is a good example here. On one occasion a critic approached him to express concern about his approach to evangelism, saying that it was limited in effectiveness. Moody asked the critic, “What method do you use?” The man responded that he “didn’t have any method.” Moody wisely replied, “Then I will stick to mine.”