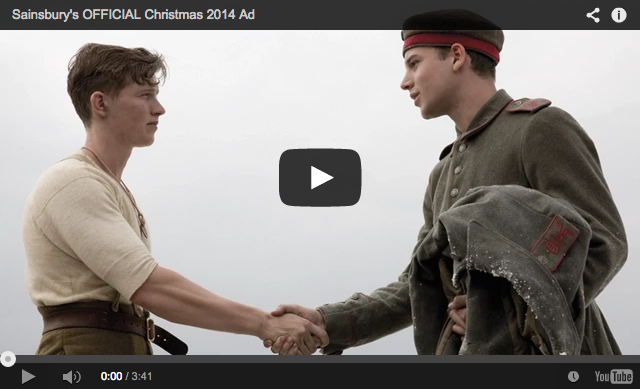 Last week a Christmas commercial went viral. The embedded video is from Sainsbury’s, a retailer in the United Kingdom. The commercial depicts the story of the famous Christmas Truce of 1914. The First World War had only begun months before, and the fighting between the Germans and the Allies was very fierce. Hope for a quick war was gone, and the men knew that they would be bitter enemies for years. A system of trenches separated the two sides, and the area in between was regarded as “No Man’s Land.”

On Christmas Eve, 100 years ago, an unofficial truce began. German soldiers began singing Silent Night in German, and men on the other side of the great divide joined in English. Men who hours before were attempting to kill one another were now singing together about the wonder of Christ’s birth. The next day the soldiers walked out of the trenches to join one another in “No Man’s Land,” where they exchanged gifts and played soccer. In subsequent months, their commanders would urge them to continue fighting, but on this sacred day, a reminder of Christ’s rescue of us caused a cease-fire. The story is captivating because we are attracted to this kind of story—the story of natural enemies becoming one, even for a brief moment in time.

The apostle Paul writes to the churches in Galatia, churches filled with Jews and Gentiles who were natural enemies, and reminds them that the foundation of their unity transcends any distinctions.

For as many of you as have been baptized into Christ have put on Christ like a garment. There is no Jew or Greek, slave or free, male or female; for you are all one in Christ Jesus. And if you belong to Christ, then you are Abraham’s seed, heirs according to the promise. (Galatians 3:25-29)

Many Jews would pray every day, “Thank you God that you did not make me a Gentile, a slave, or a woman.” Paul challenges all three of these thoughts, and reminds us that it is only Christ’s righteousness, not our gender, race, or status that justifies us. We have put on Christ like a garment; we are robed in His righteousness.

Christ makes natural enemies become one. He creates a new people, not people who attempt to stand before God on their race, their status, or their gender, but people who stand before Him in His righteousness. And we stand alongside all those who are also clothed in Him.