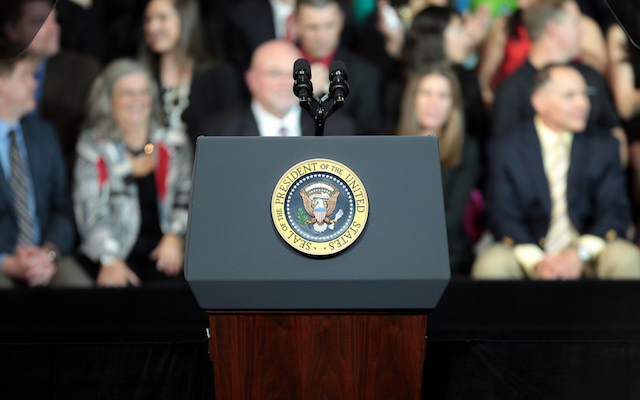 I did not binge watch all of the Republican National Convention, as other commitments and introducing my daughter to the epic television show and inspiration of a childhood nickname—MacGyver (MacGeiger)—filled up some of my schedule. I did, though, watch some of the speeches, the highlights from others, and listened to and read commentary on the effectiveness of the speeches. Obviously evaluating the effectiveness of a speech is a subjective endeavor. For example, look at the varying responses to Ted Cruz’s speech. What one calls political suicide, another calls a strong stand of integrity. What one calls passionate, another calls bombastic.

However, there are common characteristics to a great presentation. Whether delivering a message to a leadership team, a group of employees, a congregation, or a large audience, effective messages contain the following four characteristics:

A communicator without credibility is a communicator whose message won’t really be heard. The more an audience trusts the communicator, the bigger the impact the message has. Likely you have seen great messages go unheard because the people don’t trust the messenger. Or perhaps you have observed two very similar messages where one is received while the other is rejected. Often the difference between a message being received or rejected is simply trust.

An effective message is filled with truth and substance, not just flash and style. It is filled with sound thinking and reason. Aristotle taught that effective communicators possess ethos, logos, and pathos (credibility, logic, and passion). For a message to be powerful and effective, it must not only be delivered by a passionate person with credibility (trust), but there also must be truth and logic in the message.

An effective message fits the moment and the context. It is not divorced from the current reality. A message that is connected to the context and the time grasps urgency and makes application crystal clear. A messenger who delivers on timing shows that listening and caring for the people in the context has been part of the preparation.

After former NYC mayor Rudy Giuliani spoke with intensity and passion at the RNC, one commentator who followed him during his former campaign for president remarked, in essence, “Where was that in the past? I have never seen such passion.” The famous preacher John Wesley is known as saying, “Light yourself on fire and people will come from miles to watch you burn.” People want to know the communicator really believes all that is being communicated.

There are many implications for leaders, preachers, and communicators. We must be certain our lives match our words or we greatly diminish our credibility. We must invest the time and work to be sure we are bringing substance, not just fluff and style. We must listen and understand the context and the timing of our message. And we must ensure we are passionate for our message and the people we are delivering the message to. If we do not love the people to whom we are speaking, our inauthenticity will rob the message of some of its impact.