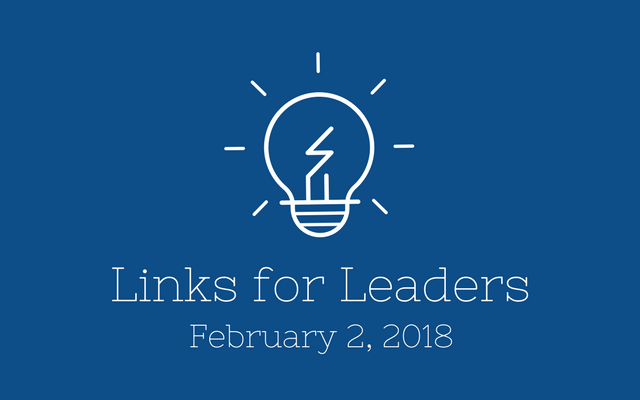 Leadership is a lot like a game of chess.

Like a grandmaster in chess, the best leaders have an uncanny ability to look several moves ahead. They anticipate changes; some well down the road and adapt accordingly.

Watch a grandmaster chess champion in action and you’ll see what I mean. Unlike pedestrian players, like me, these players don’t simply respond to each move their opponent makes. Rather, they think ahead. They anticipate multiple moves their opponent might make and devise any number of responses.

Perfectionism Is Increasing, and That’s Not Good News—Thomas Curran and Andrew P. Hill

How to Add More Time to Your Work Day—Steve Graves

Most of the delegation-related thoughts of a non-delegator don’t start with “How can we grow profits?” or “How can I best develop the people under me?” They are far more inward-focused—“I need help.” But as they sit and stare at that need, the anxiety around turning over a project outpaces that need for help. And they convince themselves not to delegate.

Sense the need for help. Look around at options. Only trust yourself over others. Add more workload. Repeat.

Why is it that some church teams stick together like brothers and sisters even under adversity?

Their attendance may be stuck, perhaps few baptisms are taking place, and the offerings remain under budget, but the morale is still strong. They stay on mission, press forward, and genuinely enjoy being with each other.

Their morale is high.

A visionary I work with often says, “I can see A, and I can see Z. What I can’t see is what’s in-between.” He’s not focused on B through Y. Therefore, those parts are unclear. They lack focus. That’s where you come in. You can determine the importance of B through Y. Most great visions will lack clarity at some level, and that’s okay. It allows others to speak into the vision, as well as the visionary.

Some visions never come to fruition because they were simply not good, or were more about the visionary than the vision. But I wonder how many visions from God were given to gifted leaders, but never happened because the visionary didn’t have someone capable to come alongside them?

Facebook Video of the Week: 3 Signs You Are a Micromanager

5LQ Podcast of the Week

5LQ Episode 225: How to Lead a Staff Retreat