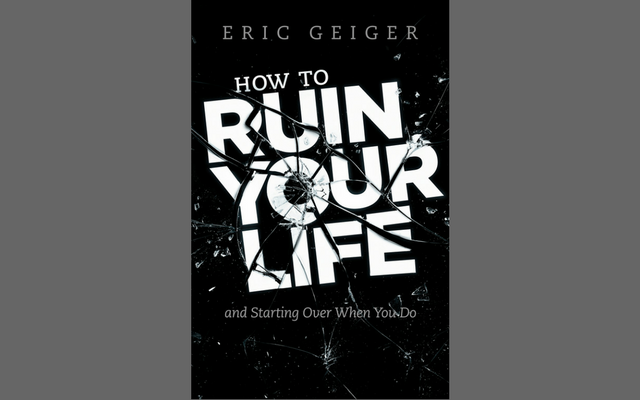 My newest book is titled How to Ruin Your Life and releases early next month. I have lived with the content of the book for over a year now, in speaking engagements, in conversations, and in forming the book, so I’m ready to get the book out the door. I am hopeful and prayerful the Lord will use the book, and here are five things I want you know about it:

1. The book was born in a season of pain and brokenness.

In my role at LifeWay, my team works daily with authors and church leaders. We love them. It is not just a job for our team but our lives. Over many months, we saw several leaders we work with implode. They were removed from their positions because the cracks in their character became obvious to those they served alongside. Marriages were lost. Families were impacted. Churches were deeply hurt. We saw the devastation of imploded and ruined lives. After a meeting with my leadership team that was marked by weeping and prayers, several encouraged me to share with all our employees. I walked through King David’s implosion with our whole team and begged them to keep repenting daily. Afterward, our book publisher, Jennifer Lyell, came to me and said, “That has to be a book.”

2. The book is based on King David’s implosion and repentance.

We should be grateful that the story of David’s implosion is in the Bible. We can learn from his implosion because in the story we see cracks in the foundation of his character that led to his downfall. The book is written to help us identify those cracks so we can repent of them. We can also learn from David’s repentance. David was at his best when he was repenting, and so are we.

3. The book is written in hopes that you won’t ruin your life.

In David’s story we learn that none of us are above ruining our lives and that any of us can implode. David penned psalms, was a man after God’s own heart, united God’s people, and served as their king. If he can implode, surely I can. Knowing we can fall and ruin our lives should cause us to look to the only One who can keep us from falling.

4. God’s grace is greater than our sin.

Half of the book is about David’s fall, and the other half is about the forgiveness he finds in the Lord. David ruined his life in isolation and repented in community. After the prophet Nathan confronted David, he repented and came to the Lord for a clean heart. Psalm 51 is David’s beautiful confession of his dependence on the Lord for forgiveness and a clean start. David’s story did not end with his downfall, and our story does not need to end with ours.

5. Be the second type of friend.

Every time I release a book, I am reminded that I have two types of friends.

The first type of friend messages asking me to send a free copy (which authors usually get around 25 free copies).

Previous Post: « Links for Leaders 3/9/18
Next Post: Of ALL People, I Never Thought THIS Guy Would Fall… »