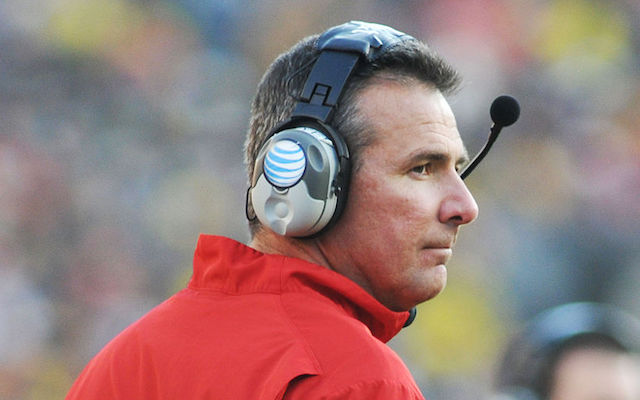 Urban Meyer coached his last game for the Ohio State Buckeyes on New Year’s Day. He is respected as one of the greatest coaches in the game, having won multiple national championships with two teams. Because he is only 54, which he admits is relatively young, he is definitely walking away from the profession earlier than many coaches end their coaching careers. But one person is not hiding her approval of his departure. Shelley, his wife said, “I would be ecstatic if he didn’t coach again. I’m done. I want him to be done. He’s too intense. It’s an end to something that we’ve been doing for a long, long, long time. She continued and explained how she has already noticed a difference in her husband, “He’s been fun again. He’s back to the Urban I knew when he wasn’t so stressed out and anxious and having headaches.”

“I’m done. I want him to be done.” I have heard this statement and similar statement from the spouses of leaders for years. I don’t know Urban and Shelly Meyer but I understand the pain of leadership, and know that impacts more than the leader.

In the classic work, Spiritual Leadership, Oswald Sanders wrote about all the costs a leader pays: self-sacrifice, loneliness, fatigue, criticism, rejection, pressure, and perplexity. He capped this list with a statement about the cost to others. He wrote, “people close to a leader pay a price, too. Sometimes a heavier price.” Yes, leadership can bring blessings and joy to those close to a leader. But leadership can and often does bring adversity to those close to the leader.

In my opinion, the most painful price of leadership is seeing those you love impacted by the responsibilities you have taken on. I have seen this in leaders I have served alongside. I have seen leaders withstand immense amounts of pressure, handle criticism with grace, and continue with great perseverance. Yet when their family is impacted, it touches a different place of pain. I have always admired leaders who don’t want their families to be hurt because of their roles, who care more about their families than the organizations they lead.

Should all leaders step away from their roles when trials impact a family? Of course not. Often the Lord uses trials to mature us and develop us. But leaders must absolutely care more about their families than they care about their organizations. Sometimes this means pushing through and giving your family an example of perseverance that will encourage them through their whole lives. Sometimes this means stepping away so your family remains or regains the priority.

Previous Post: « Sunday was “National Student Pastor Preaching Day” and Why That’s Great
Next Post: 2 Reasons Christian Leaders Can Take Risks (More Than Other Leaders Can) »