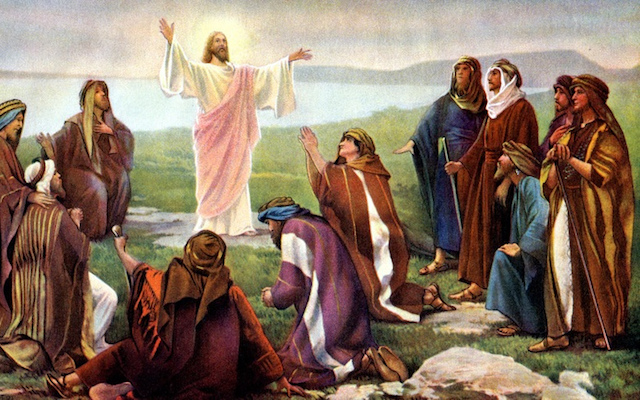 Jesus’ teaching and ministry began with a small group of unlearned, ordinary men and then turned into a movement that rapidly spread and is still spreading across the world. After rising from the dead, Jesus handed over the ministry to the disciples He invested in.

Thomas insisted the testimony of the other disciples was not enough for him to believe that Jesus was alive; he needed to see “the mark of the nails.” Jesus met Thomas where he was and showed Thomas His hands and side (John 20:27). Jesus still, in His grace, meets us where we are.

One day Jesus appeared to His disciples while they were fishing, and He involved them in another miracle. He invited them to cast their nets to the right side of the boat, where they caught so many fish that they could not pull the nets in (John 21:6). Jesus still involves us. Jesus does not need us, but because He loves us, He chooses to include us.

On this same day, when the disciples came ashore, Jesus had breakfast ready for them. Rather than demanding they serve Him, the King who conquered the grave made breakfast for His disciples (John 21:9). The essence of the Christian faith is not that we serve Him but that He has served us.

After feeding His disciples, Jesus pursued Peter to restore Him. Peter had denied he even knew Jesus. Instead of ostracizing, Jesus pursued him with a question: Peter do you love Me (John 21:15)? Thankfully, Jesus still pursues His people.

As Peter declared his devotion and love for Jesus, Jesus challenged him to “feed My sheep” (John 21:17). Jesus challenged Peter to commit his life to teaching and shepherding people. And Jesus challenges us to use this one life He has given us for His glory and the advance of His kingdom.

Jesus empowered His disciples to “go…and make disciples of all nations” (Matthew 28:19) and reminded them that He had the authority to do so. Jesus shared responsibility for the mission with His disciples. He empowered them to teach people to observe everything He commanded. The commission He gave His disciples is our commission too.

There are, of course, implications for leaders.