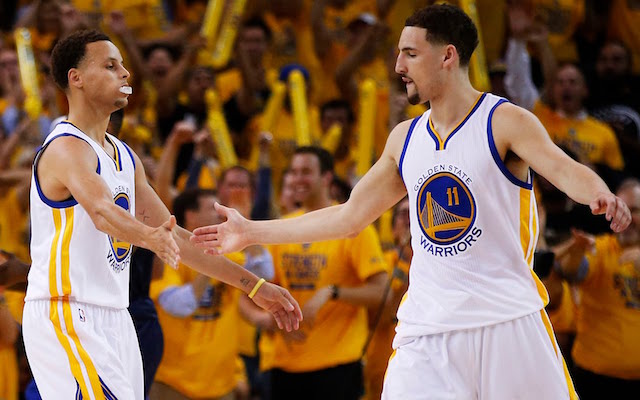 In his business book, How the Mighty Fall, Jim Collins chronicles what causes great companies to crumble. The first stage is hubris. The dictionary defines hubris as excessive pride.

When the Cleveland Cavaliers beat the Golden State Warriors last night to win their first NBA championship behind monster performances from LeBron James and Kyrie Irving, they did something no team has ever done before in the NBA Finals when they overcame a 3-1 deficit. Few saw the upset coming.

In this New York Times article, published in March, we get a glimpse into the excessive confidence of the majority owner Joe Lacob. Here is a section:

After the pickup game, Lacob (the owner) pulled on a sweatshirt and went to breakfast at a cafeteria on the ground floor. He goes there so often that one of the smoothies on the menu, involving orange juice, vanilla yogurt, bananas and strawberries, has been named for him. He pointed this out, then ordered one. When I asked him about the previous night’s game, he could hardly contain himself. He boasted that the Warriors are playing in a far more sophisticated fashion than the rest of the league. “We’ve crushed them on the basketball court, and we’re going to for years because of the way we’ve built this team,” he said. But what really set the franchise apart, he said, was the way it operated as a business. “We’re light-years ahead of probably every other team in structure, in planning, in how we’re going to go about things,” he said. “We’re going to be a handful for the rest of the N.B.A. to deal with for a long time.”

“We are light years ahead of probably every other team.”

And then in this SBNation post, published in April, Tom Ziller cites the NY Times piece and shows a clip of Andre Iguodala comparing a PLAYOFF game against the Rockets to scrimmage/practice. For this reason, the article was called, “The Warriors Arrogance Runs Deep.” The article opened with the question: “From franchise owner Joe Lacob on down, the Warriors are fueled by hubris. It’s a quality that makes them great, but will it eventually be their downfall?”

The line between confidence and cockiness may sometimes appear thin, but the two are miles apart. Hubris presumes on so much, on one’s ability, on the future, on everything being in your control. Confidence is more humble and recognizes the fragility and vulnerability that we all face, at all times, and therefore strives to seize the moments because time is fleeting.

Am I saying all the players were filled with pride? Of course not. So please save the hate mail as I enjoyed watching the Warriors play too. I am just pointing out that multiple people covering the Warriors noticed the pride and pondered if it would lead to destruction. After a record season, I would imagine an air of pride, or even an accusation of pride, would be hard to hold off. Muhammad Ali once said, “It’s hard to be humble when you’re as great as I am.”

But in moments of success, the wise understand the success came from above and they are humbly grateful for God’s graciousness. The wisdom writer said so long before any sports commentator or business guru like Jim Collins: Pride comes before destruction (Proverbs 16:18).