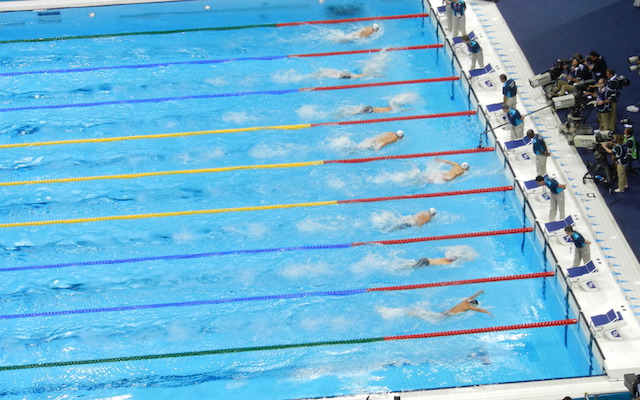 As the Olympics are in full swing, swimming takes its every four years turn at being on the forefront of our collective sports’ attention. And it should. One of my favorite sports moments is the 2008 relay, in which the U.S. men’s swim team came from behind on the back of Jason Lezak’s incredible race to win the gold. Oh yeah, Michael Phelps was on the team too.

In her book Grit, Angela Duckworth argues that great feats are accomplished by “grit,” which is the combination of passion and perseverance. Passion combined with the discipline to persevere produces great results. When it comes to swimming, however, we like to believe the mastery of a sport is a mystery—that it is merely a gifted athlete born to do what we could never do. Duckworth writes, “We don’t want to sit on a pool deck and watch the swimmer progress from amateur to expert. We prefer our excellence fully formed. We prefer mystery to mundanity.” Duckworth argues that our proclivity to mythologize talent is self-serving because it lets us off the hook. It gives us an excuse not to persevere, not to work hard, not to embrace the discipline required to live in the mundane.

Duckworth recounts her interview with Dan Chambliss, a sociologist who studied swimmers for years and wrote a study about swimming titled “The Mundanity of Excellence” and concluded:

“Superlative performance is really a confluence of dozens of small skills or activities, each one learned or stumbled upon, which have been carefully drilled into habit. There is nothing extraordinary or superhuman in any of those actions; only the fact they are done consistently and correctly, and all together, produce excellence.”

This principle transcends swimming. In any role, persevering in the mundane is what leads to mastery. Consistency in the small things is what makes the big impact.

For the Christian, consistently studying the Scripture is what develops your character. Though the action of grabbing your Bible may feel small, the consistency makes a massive impact. Consistently loving and serving those around you gives an opportunity to share the reason for your hope. For the Christian, the mundane is sacred.

For the Christian leader, consistently executing the essentials is what builds an excellent culture. Not getting bored with the basics and constantly chasing something new, but consistently fulfilling the duties of a leader.