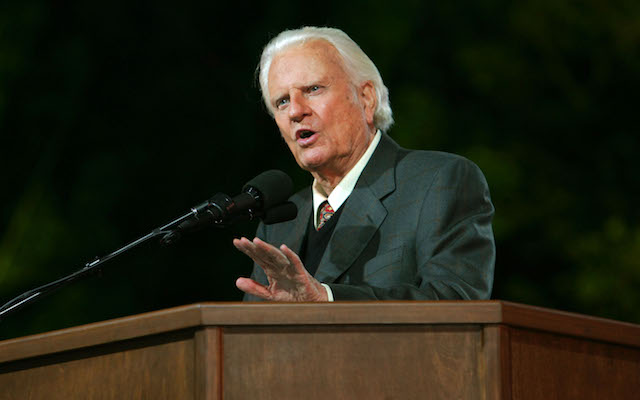 There is no doubt that Billy Graham has been used by the Lord to bring people to Christ, to expand His kingdom, and to give us a great example of faithfulness. There is the quantitative (the data) and the qualitative (the stories) about Billy Graham’s legacy. On the quantitative, we know some remarkable stats through a research project conducted on 1,010 churchgoers by LifeWay Research. One of the most striking data points is that nearly half of all protestant church attenders have watched a Billy Graham sermon. Billy Graham’s simple and clear declaration of the gospel has been heard by many.

Then there is the qualitative, the stories of lives changed through the preaching. Jennifer Lyell, who oversees books and book publishing for all of LifeWay and serves on my team, met the Lord at a Billy Graham crusade. She did not grow up in church but found herself at a crusade and heard the gospel and was saved. A few days later, she walked into a LifeWay store to buy her first Bible. And the Lord has been growing her and maturing her ever since.

He held tightly to the Word.

Billy Graham, early in his ministry, traveled and preached alongside Charles Templeton. Charles began to question the core doctrines of the faith and over time walked away from the Christian faith because he claimed he could no longer believe. He has recounted a conversation with a young Billy Graham where he challenged Billy not to settle for his belief in the Bible and to explore facts that contradicted the Scripture. Billy’s response, according to Templeton, was “When I take the Bible literally, when I proclaim it as the Word of God, my preaching has power.”

He fought to stay blameless.

Graham’s fight for purity is so notable that there is even a Wikipedia article on the “Billy Graham rule,” his commitment not to be alone with a woman other than his wife. While the rule is sometimes criticized, we know Billy Graham has finished well without any scandal and without any accusation of immorality. However, as this Christianity Today article pointed out, this was not the only “Billy Graham rule.” Billy Graham’s ministry was marked with integrity, and he fought to stay above reproach in the following four ways:

In 2002, I was a student pastor in Cincinnati, Ohio, when I loaded up several charter buses to take high school kids downtown to hear Billy preach. He walked slowly to the podium, helped by D.C. Talk, and preached a clear and simple message on how you could know God and have your sins forgiven—only by believing in Jesus and trusting Him. Amen.