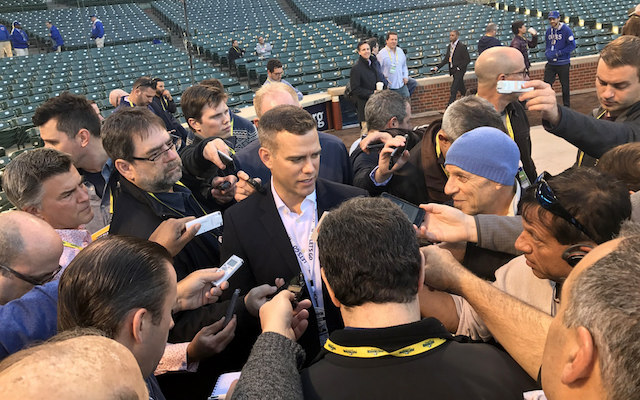 Fortune magazine recently named Theo Epstein the greatest leader in the world. Epstein is the president of baseball operations for the Chicago Cubs and is known as the architect behind their first World Series championship in over 100 years. He performed the same way for the Boston Red Sox before taking the assignment in Chicago. So most would agree that Epstein is an incredible leader. But his response, when discovering the news, shows he is an even better leader than I imagined. Here is how he responded to the news in a text message to ESPN’s Buster Olney:

“Um, I can’t even get my dog to stop peeing in the house,” Epstein [said]. “That is ridiculous. The whole thing is patently ridiculous. It’s baseball—a pastime involving a lot of chance. If Zobrist’s ball is three inches farther off the line, I’m on the hot seat for a failed five-year plan. And I’m not even the best leader in our organization; our players are.”

Besides revealing humor and humility, that quote is awesome for several reasons and shows Theo Epstein embraces and understands these three realities about leadership:

1. You are the hardest person you will lead.

Epstein jokes about being unable to prevent his dog from peeing in his house. Though joking, it does show Epstein is aware of the relationship to leading oneself and leading others. Plato stated, “The first and greatest victory is to conquer yourself.”

2. Leadership is about the team more than the leader.

Epstein knows that without the commitment and performance of the team, he would be doomed to failure. He declares the players to be the best leaders in the organization. While the leader impacts the team, in many ways the team makes the leader. A group can choose to doom the leader’s leadership by not following, by not rallying around a shared vision, by not committing.

Leaders are not leaders forever. The assignment is temporary. Epstein understands that a few plays turning out differently and he is not celebrated as a hero. Success is frail and fleeting. Understanding our fragility helps us walk in humility and focus on what matters most.

Thank you, Theo Epstein, for a hilarious quote that also has some meat to it.